Originally published in 1905, this is a 1942 reprint edition of the Western ( Klondike era Gold Rush - but it counts as a Western) novel - The Spoilers.

Small closed tears to th edges of the dustjacket, Grosset and Dunlap, the publishers, tended to not put a date of publication on reprints, so the only way to date the book is from the date of the film.

The novel is based on a true story of corrupt government officials, such as Alexander Mackenzie, seizing gold mines from prospectors, which Beach witnessed while he was prospecting in Alaska during the Gold Rush. 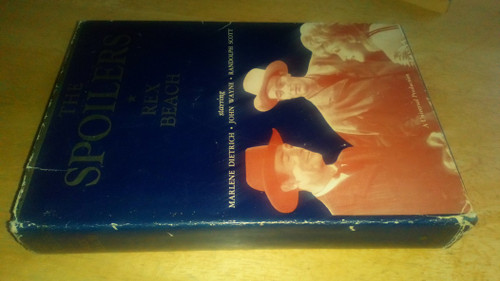