First published in 1961, this is the 1963 edition from Four Square . Crease to back cover, spine lean, and damaged lower spine ( closed crack) Heavy age spotting to te inside front cover ( pictured)

Born in Dublin’s north inner-city, Dominic Behan spent the formative years of his life in Crumlin, where the Behans were moved to from Russell Street. He would joke about the “jungle” of Crumlin in his memoir Teems of Times and Happy Returns, still one of the great Dublin memoirs, capturing both the stories of the inner-city streets and the new suburban experience.

A plaque on the Kildare Road house honours Brendan, but in truth it was a house of writers, singers and debate. It is difficult for us now to imagine how transformative Crumlin, Kimmage and schemes like them were in the hungry 1930s, and not just for those moving into them. Brendan would quip that there was “no such thing as suburbia, only Siberia.” Crumlin native Fiona Watchorn remembered how “we had never seen so many houses – all of the same shape and size, and wondered how the new kids could find their own.”

Dominic remembered Russell Street fondly, recalling that “the native industries of Russell Street were drink and cleanliness, represented respectively by the Mountjoy Brewery and the Phoenix Laundry.” It was far from the worst of tenement Dublin, with Dominic recalling how “Russell Street was the extreme tip of a jungle of north city tenements: Georgian, red-bricked, strait-laced, and, at this time, complete with closed hall-doors and mahogany railed staircases. Even a few of the windows were still intact.”

The atmosphere in which the Behan children were raised was fundamentally radical. Stephen Behan, Dominic’s father, was a veteran of the War of Independence, and took the Republican side in the Civil War which followed. By trade, Stephen worked as a signwriter, a trade Brendan would briefly follow him into. Stephen married Kathleen in July 1922, as the country was in the midst of Civil War. Her brother was Peadar Kearney, author of The Soldier’s Song, the national anthem. Not long after his wedding, Stephen was himself imprisoned. Family lore had it that Brendan Behan would first see his father through the railings of prison.

Dominic, born in 1928, arrived too late for the excitement of the revolution, but he found his heroes in that tradition. To him, “Jim Larkin gave a new meaning to Christianity when he decided to fight his cleric critics with their own cannons – a Bible and a plea for a true brotherhood of man.” He brought his politics into much of what he did; working on a number of building sites with his brother Brendan in the 1940s, with one foreman complaining to their father that they were “the greatest bastards I’ve ever come across.One wants the men to strike for an incentive bonus so that the other one can bring them down to the pub to drink it.’ His political activism would land him in trouble in the early 1950s, with his role in agitation for the movement against unemployment seeing him imprisoned. 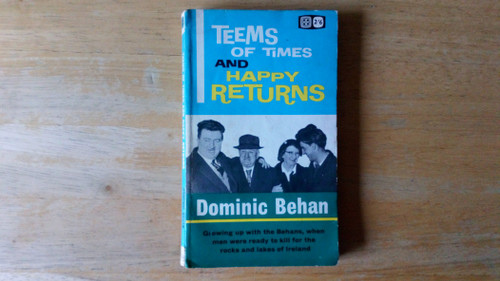