For centuries, but most especially since the Famine of 1846-51, one of rural Ireland's leading export had been people. While Dublin gained inhabitants from the 1940's onwards, the rural West of Ireland continued its steady decline: young men but especially young girls went elsewhere to marry and earn a living. Increasingly, aging spinsters and bachelors were left to tend the farms; within communities mutual aid, local markets and the celebration of festivals atrophied. Brody spent five years visiting in the bleak, impoverished west, working among the people, meeting them not as an interviewer but as a temporary resident. Here he offers both his statistical observations drawn from parish records and official sources and his personal impressions of ' Inishkillane' in County Clare - (an amalgamation of several actual west of Ireland parishes). The demographic analysis of births, marriages and emigration is stark but not nearly so depressing as the closeup shots of the isolated bachelor farmers, the publicans and their clientele, and the one shopkeeper who represents the new entrepreneurial class. A sociological lament, but a lament nevertheless, for the slow, apparently irreversible erosion of an agrarian society that was no longer viable.
This is the first Pelican edition , from 1974, externally very good, unmarked, spine is creased, internally unmarked apart from the usual page tanning. 1st published 1973.
'Inishkillane' was largely based on communities in West Clare, as well as taking information from parishes in Conamara and , West Cork & Donegal. 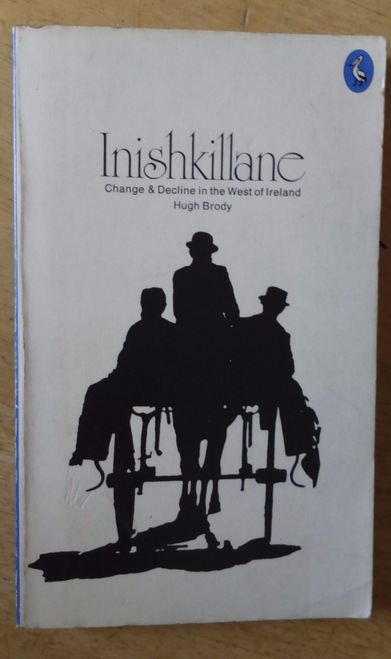