`About this coast... In the event of war it seems to me that every inch of it would be important, sand and all.'

Executed in 1922 for his involvement in Irish republicanism, Childers in remembered most vividly for his ground-breaking spy novel, The Riddle of the Sands (1903). In spite of good prospects in the Foreign Office, the sardonic civil servant Carruthers is finding it hard to endure the emptiness and boredom of his life in London. He reluctantly accepts an invitation from a college friend, Davies, the shyly intrepid yachtsman, and joins him on a sailing holiday in the Baltic. The regeneration of Carruthers begins as he is initiated into the mysteries of seamanship, but the story builds in excitement as Carruthers and Davies discover a German plot to invade England.

Like much contemporary British spy fiction, The Riddle of the Sands reflects the long suspicious years leading up to the First World War and the intricacy of its conception and its lucid detail make it a classic of its genre.

This is a Sidgwick & Jackson UK hardcover reprint, 1941 ( 19th impression) with the subtitle added A record of Secret Service, and a brief foreword  by M.A Childers, fold out map inside front cover ( fully intact) 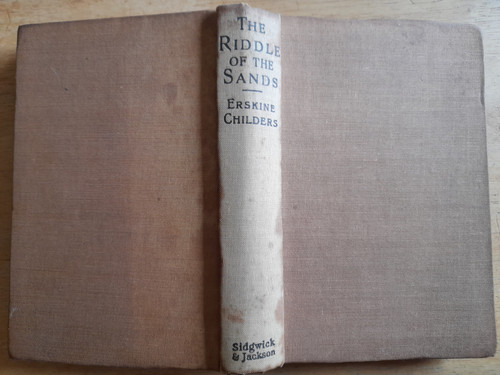