First published in hardcover in 1970, this is the first UK/ Irish edition of what was to become a standard book on the IRA in the 20th century.  Written in 1969-70 after the renewal of the IRA as an active force in Northern Ireland, it looks primarily back to the origins and evolution of the IRA from the IRB onwards, and as it was published , with the Provisional movement and the full onslaught of the Troubles .

'The IRA' provides the only objective, comprehensive history of the organization that has transformed the Irish nationalist movement during the past century. With clarity and objectivity, Coogan examines the IRA's origins, its foreign links, bombing campaigns,  and sectarian violence and ideology.
Meticulously researched and backed up by interviews with past and present members of the organization, Tim Pat Coogan's book is an authoritative and compelling account of modern Irish history.'' ( from blurb)

First edition in dustjacket, some age spotting to the top of the page block, lighter toning throughout, there is pencil highlighting to the first chapter . Binding solid, published by Pall Mall Press , London, with sections of photographs, index, names index. Closed 1 cm tear to edge of inside dustjacket flap.

Tracked delivery within Ireland is included in the cost. 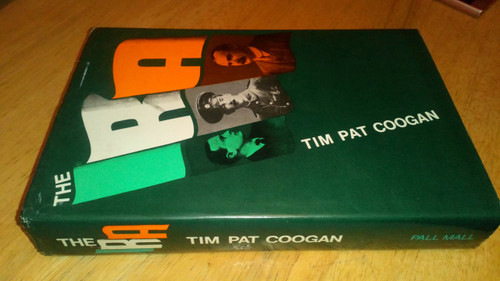