Two books by Alistair Cooke, a longtime UK born US based journalist, commentator and essayist.

Six Men is a collection of 6 biographical essays about 6 notable figures that were personally known to Cooke - Charles Chaplin, King Edward VIII, H.L Mencken, Humphrey Bogart, Adlai Stevenson, and Bertrand Russell. Some of these essays were originally published in the 1950's,  the others were written for this book, first published in 1977, here in a 1980 reprint. Very Good Condition.

Letters From America - 1946-1951 - ( Originally published 1951, here in a 1981 Penguin reprint) Written for radio broadcast , these essays capture the mood of post-war America for his European audience - from his home in New York on 71st Street, visits to California, D.C and elsewhere. Very Good condition, eason price sticker on back cover. 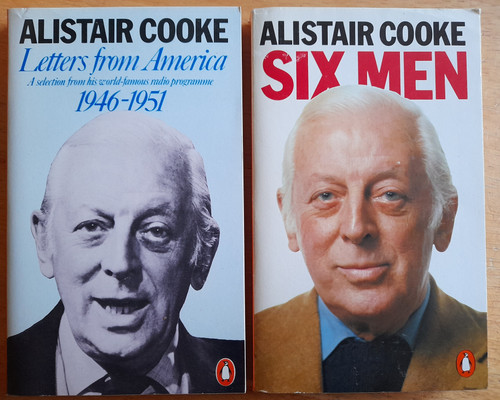