Craig, Maurice - The Elephant and the Polish Question - HB -1990

The Elephant and the Polish Question by Maurice Craig

Part meditation, part autobiography, part exploration, part miscellany, The Elephant and the Polish Question is the distillation of a literary life of more than forty years. Owing something to Trivia, the Notebooks of Samuel Butler, and Norman Douglas, it touches on many subjects about which the author has thought but not hitherto had the chance to write, from coincidences to funerary customs, from book-collecting to ship-design, and from prose style to the art of trespass.

Snapshots of childhood, friends and personalities blend with reflections on education, music, architecture, the decay of travel, the evolution of language, and much besides. Maurice Craig seeks the hidden links between his recurrent preoccupations, occasionally bringing to light a facet of something that looks like – and may even be – truth. Anecdotal and analytical by turn, the author is resolute in retrospect, believing that only the past is knowable.

There are vivid set-pieces such as the obsequies of William Butler Yeats, visits to No. 10 Downing Street and other notable buildings, and the undeservedly little-known vicissitudes of the Druce-Portland Case. While himself incapable of consciously telling an untruth, the author proves himself a connoisseur of forgery and imposture. He has, in a back-handed sort of way, enjoyed life its contradictions and discontinuities. The reader who is prepared to follow him, or to browse at his own pace, will be rewarded.

‘Our finest living essayist. Maurice Craig’s exquisite collection… is at once literary, erudite and mechanical: poppet-valves and cams, Yeats’s inability to spell, bookbindings and motor-car design, the Tichborne scandal and airships, raised foc’s’les and the particularity of certain words – all glide before his mind, all entrance, and all find an elegant home in his essays.’ – Kevin Myers, The Irish Times

‘This is a remarkable book… Craig writes entertainingly about a multitude of people.’ – Hubert Butler, Irish Independent

Maurice Craig (1919-2011) was born in Belfast and educated in Dalkey and Shrewsbury, and at Magdalene College, Cambridge, and Trinity College, Dublin, where he gained a doctorate in Landor studies (suggested to him by Patrick Kavanagh). An architectural historian, poet and biographer, he is the author of Mausolea Hibernica, The Elephant and the Polish Question, The Architecture of Ireland, Classic Irish Houses of the Middle Size, Irish Bookbindings, Dublin 1660-1860 and The Volunteer Earl, among other books, and edited W.S. Landor: One Hundred Poems. 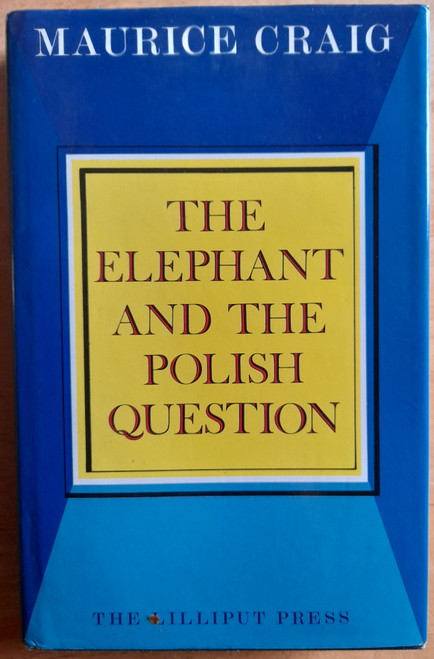 Craig, Maurice - The Elephant and the Polish Question - HB -1990