Hardcover fist edition, 4th printing, Summit books, USA, 1987. In very good condition internally unmarked, some light edgewear. The title of the book comes from a quote attributed to Nathan Rothschild - 'The time to buy is when blood is running in the streets..' ( ie in time of crisis)

Books like this were ( and are ) common in the financial services and investments sector , then and now. However, the authors of this are more noteworthy, Wlliam Rees-Mogg ( former editor of the Times of London)  is the father of Jacob Rees-Mogg, Tory grandee and Brexiteer, and James Dale Davidson, noted US conservative and author of a number of subsequent books on investments .

In the  tradition of Harry Browne, Douglas Casey, Adrian Day, et al., the authors offer a less than sanguine appreciation of socioeconomic prospects. Their shtick is a hitherto unheralded discipline dubbed ""megapolitical analysis."" Using this big-picture approach, Davidson and Rees-Mogg cast a cold eye on the global village, probing for power shifts. Among other bleak outcomes, their audit projects an early end to US hegemony, creeping fragmentation of production means, a breakdown in international order, market instability, and deflation. The bulk of the text is devoted to .. commentary and what-if scenarios. Many of the briefings provide insights of potential value to investors, e.g., a rundown on the implications of declining blue-collar wage rates for retailing. An equal if not greater number, though, reach tenuous conclusions of dubious utility; typical in this respect is an extended discussion of how Communist-bloc reform could boost the prices of tropical commodities like cocoa. Indeed, beyond predicting that a real-estate crash is overdue, the authors largely avoid committing themselves on which investments might afford advantageous risk/reward opportunities in the volatile market environment they foresee. As a practical matter, Davidson and Rees-Mogg have reinvented a wheel known on Wall Street as top-down analysis. ( from the Kirkus reviews commentary on the book in 1987)

The basic premise of the book is to follow events - current affairs, the global economy, global geopolitics , technology advances etc, & that only those in the know are aware of these tactics for amassing wealth by paying attention to whether there truly is value in an industry, in spite of the prices, in spite of the headlines...and preferably buy low, VERY low. 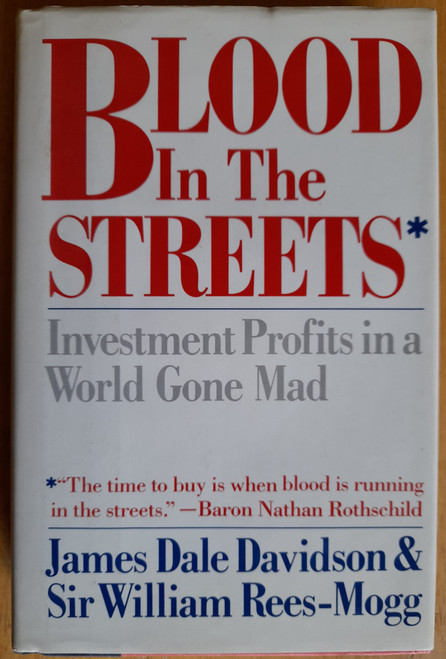