When Dr Primrose loses his fortune in a disastrous investment, his idyllic life in the country is shattered and he is forced to move with his wife and six children to an impoverished living on the estate of Squire Thornhill. Taking to the road in pursuit of his daughter, who has been seduced by the rakish Squire, the beleaguered Primrose becomes embroiled in a series of misadventures - encountering his long-lost son in a travelling theatre company and even spending time in a debtor's prison. Yet Primrose, though hampered by his unworldliness and pride, is sustained by his unwavering religious faith. In The Vicar of Wakefield, Goldsmith gently mocks many of the literary conventions of his day - from pastoral and romance to the picaresque - infusing his story of a hapless clergyman with warm humour and amiable social satire.

'He loved all mankind; for fortune prevented him from knowing there were rascals.'

Oliver Goldsmith's hugely successful novel of 1766 remained for generations one of the most highly regarded and beloved works of eighteenth-century fiction. It depicts the fall and rise of the Primrose family, presided over by the benevolent vicar, the narrator of a fairy-tale plot of impersonation and deception, the abduction of a beautiful heroine and the machinations of an aristocratic villain. By turns comic and sentimental, the novel's popularity owes much to its recognizable depiction
of domestic life and loving family relationships.

Regarded by some as a straightforward and well-intentioned novel of sentiment, and by others as a satire on the very literary conventions and morality it seems to embody, The Vicar of Wakefield contains, in the figure of the vicar himself, one of the most harmlessly simply and unsophisticated yet also ironically complex narrators ever to appear in English fiction.

This edition published by Dent UK, 1979, in plain green covers, titles in black . 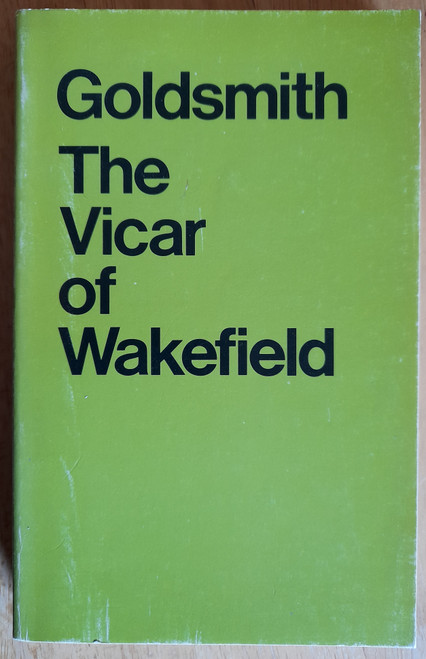