Book 1 is SIGNED by the author, in black ink to teh title page, undedicated - Books 2 and 3 are UNSIGNED

Starting with the 2001 novel Pashazade and continuing with Effendi (2002) and Felaheen (2003), the point of divergence occurs in 1915 by Woodrow Wilson brokering an earlier peace so that WW1 never expanded outside the Balkans The books are set in a liberal Islamic Ottoman North Africa in the 21st century, mainly centring on Alexandria referred to as El Iskandriyah.

The central character, Raf, is an enigma. Genetically enhanced, frequently wired on various drugs, ( so much so that occasionally accompanied by a hallucinatory fox) and strongly conscientious in everything he does, Raf's past is as much a mystery as his future.

The first book centres on the arrival in Alexandria of Bey Ashraf al-Mansur, claimed to be the son of the Emir of Tunis. Shortly after his arrival, though, Raf's tendency to do exactly what he thinks is right leads to unexpected consequences. Between caring for his niece, Hani, and attempting to understand Zara, the girl he was to marry, Raf ends up suspected of his Aunt Nafisa's murder, running from the police as he tries desperately to work out who really killed her.

Effendi was shortlisted for the BSFA Award for Best Novel.

The second book opens with the discovery of a body near the mansion of billionaire Hamzah Effendi, Zara's father. As the new Chief of Detectives, Raf is obliged to investigate, he uncovers a past as a child soldier under the infamous Colonel Abad that Hamzah would rather forget. Meanwhile, as agents from Berlin, washington and Paris battle diplomatically for influence over North Africa's most influential port, its young ruler is sent on holiday by Koenig Pasha, whose cryptic notes Raf is left struggling to understand. The whole city hangs in the balance, and this time, Raf will need help to save it.

This novel includes a second narrative dealing with the young Hamzah's actions as a young soldier surviving famine and desert to carry out his lethal mission for the mysterious Abad.

The third book starts with the near-death of the Emir of Tunis, forcing Raf to investigate the biggest mystery of all, his own origins. As the 11-year-old Hani races to get to the Emir's banquet, Raf is forced underground to discover the truth about his father. Kashif Pasha, the Emir's other son, is intent on removing any threat Raf might pose to his own claim to the throne, but he could get more than he bargained for if Raf's djinn -like abilities are as real as Hani thinks. 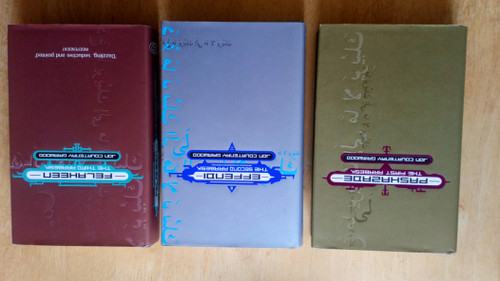