Hezlet, Arthur - The B Specials - A History of the Ulster Special Constabulary - Vintage HB - 1ST Edition 1972

The Ulster Special Constabulary (USC; commonly called the "B-Specials" or "B Men") was a quasi-military reserve special police force in Northern Ireland from 1920-1970 It was set up in October 1920, shortly before partition. It was an armed corps, organised partially on military lines and called out in times of emergency, such as war or insurgency. It performed this role in 1920–22 during the War of Independence and in the 1950s, during the IRA border campaign. There was no equivalent organisation in either the Republic or the UK.

During its existence, 95 USC members were killed in the line of duty. Most of these (72) were killed in conflict with the IRA in 1921 and 1922. Another 8 died during the Second World War, in air raids or IRA attacks.

The force was almost exclusively Ulster Protestant and as a result was viewed with great mistrust by Nationalists. Unionists generally supported the USC as contributing to the defence of Northern Ireland from subversion and outside aggression, from the Irish Free State and later the IRA ( especially during the 'Border Campaign' of the 1950's .

The Special Constabulary was disbanded in May 1970, after the Hunt Report, which advised re-shaping Northern Ireland's security forces to attract more Catholic recruits and disarming the police. Its functions and membership were largely taken over by the UDR ( which unlike the USC was under direct military control) and the regular RUC ( later replaced by the PSNI.

One of the first detailed histories of the orgainisation after disbandment,  Hezlet, himself a resident of Aghadowey, was a noted military and naval historian. The main value of the book is that it is a frank insider account by a former military official , rare for the period .

THIS IS A FORMER PUBLIC LIBRARY COPY ( DUBLIN), a clopy of the first edition  1972 by Tom Stacey Ltd, London) Uncommon in hardcover .

Condition - dustjacket - now in a ( modern) removable jacket protector, the jacket shows heavy wear to edges, at small areas of paper loss at all folds, ( esp by spine) Residue mark of a plastic label to spine.

Condition - BOOK - Fair only - there is the usual residue from a library pocket on teh front endpaper, a section of the top front endpaper has been cut away. The title page has a ( long!) annotation by a previous reader, railing against the book as being propaganda. A smaller note underneath in another hand adds wryly that there is no such thing as ' objective history' . Binding is holding but loosened slightly , some underlining to text ( but not much, no other inscriptions. 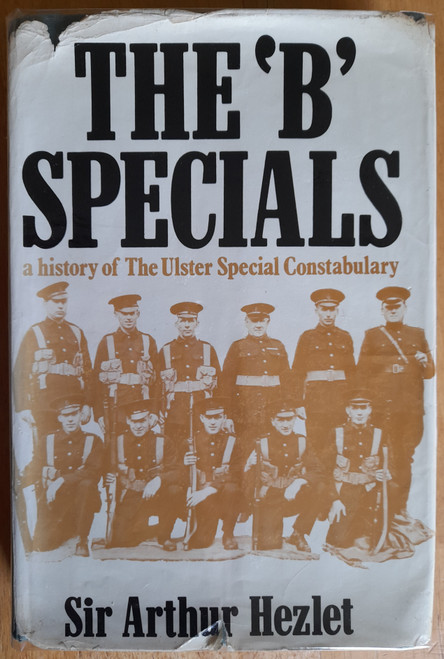 Hezlet, Arthur - The B Specials - A History of the Ulster Special Constabulary - Vintage HB - 1ST Edition 1972