This study of the development of arts policy in Ireland since 1922, which was first published in 1990, became a source of Irish political controversy when it was claimed in the "Dáil" (Irish parliament) that it had been shredded by its publisher on the instructions of the Irish Government. It is here reissued with minor revisions.

False Starts: 1922-32 / Private Initiatives and Official Pipedreams / Cautious Beginnings - The Seeds of Progress: 1940-8 / The Bodkin Report and the Formation of 'An Chomhairle Ealaion': 1948-51 / Limited Means and Ambitious Ends: 1951-6 / All Changed, Changed Utterly: 1956-66 / Patronage Under Fire: 1967-73 / Expansion and Development: 1973-82 / Appendix A The Arts Act, 1951 / Appendix B The Arts Act, 1973 / Government Grants to the Arts Council: 1951-88 / Appendix D List of Directors/Chairmen, Members and Secretaries/Directors of the Arts Council: 1951- etc. "Dreams and Responsibilities: The State and the Arts in Independent Ireland traces the development of arts policy in Ireland since 1922. Its preparation involved the examination of government files, the archives of the Arts Council - An Chomhairle Ealaion - and the private correspondence of some of the major contributors to the shaping of Irish arts policy. This research has resulted in a fascinating and entertaining history. It describes the many successes and failures while demonstrating the fundamental change in official policy towards the arts from general indifference and, at times, outright hostility, to an acceptance of the essential role of the arts as an important civilising influence in Irish society. Much has been achieved but much remains to be done. This book is required reading for anyone wishing to understand the development of the arts and arts polilcy in Ireland." 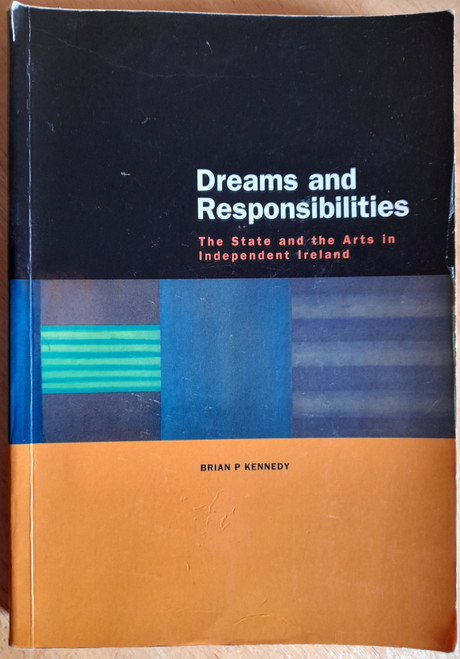