As a work of alternate history, The Boleyn King series plays with the lives and events of real people, imagining what might have happened in each of their lives if Anne Boleyn had given birth to a son in 1536...

What if Anne Boleyn had given Henry VIII the son he so desperately wanted, saving her own life and changing English history forever?

Just seventeen years old, Henry IX, known as William, is a king bound by the restraints of the regency yet anxious to prove himself. With the French threatening battle and the Catholics sowing the seeds of rebellion at home, William trusts only three people: his older sister Elizabeth; his best friend and loyal counselor, Dominic; and Minuette, a young orphan raised as a royal ward by William's mother, Anne Boleyn.

Against an undercurrent of secret documents, conflicting intelligence operations, and private murder, William meets a foreign war and domestic rebellion with equal resolve. But hearts are not so easily commanded. When romantic obsession threatens a new generation of Tudors, who among them will pay the price of a king's desire? And what twists of fate will set Elizabeth on her path to the throne?

The regency period for Henry IX is over and the king, called William, sits alone on the throne. But England must still contend with those who doubt his legitimacy, both at home and abroad. To diffuse tensions and appease the Catholics, William is betrothed to a young French princess but he only has eyes for Minuette, his friend from childhood, which sends court tongues wagging and assassins plotting. In a court of secrets, which lies have the power to change history forever?

As English ships and soldiers prepare for the threat of invasion, William marches to the drumbeat of his own desires. He still burns for Minuette, his longtime friend, but she has tied herself to William's trusted advisor, Dominic, in secret—an act of betrayal that puts both their lives in danger. Elizabeth, concerned over her brother's erratic, vengeful behavior, has laid her own life on the line by assembling a shadow court in an effort to protect England. With war on the horizon, Elizabeth must decide where her duty lies: with her brother or her country. Her choice could forever change the course of history. 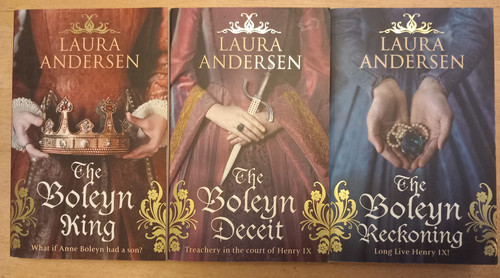