Francis Ledwidge, the Irish nationalist and poet, was born in Slane on 19 August 1887 the son of a poor labourer.  Leaving school at the age of 14 he worked in various manual labour positions while developing a love for and honing his own poetical talents.  It was in 1911 that Ledwidge first received notable recognition for his poetry.  Having sent a collection of his poems to well-known author Lord Dunsany he received a favourable response, Dunsany assuming the role of mentor to Ledwidge, introducing him to the Dublin literary scene.  Although possessing moderate Irish nationalist views Ledwidge nevertheless signed up with the British Army - the Irish Volunteers in October 1914 - to serve in France and Flanders during World War One, on the basis that it was unreasonable to expect others to fight for the freedoms that he would later enjoy.  Despite his initial reluctance to enlist he nevertheless argued that his service with the British during World War One was in no way incompatible with his nationalist views: rather, he believed he was furthering the cause of Irish independence from Britain.

One year after war began, in 1915, and while serving abroad on active duty Ledwidge saw an initial volume of fifty of his poems published as Songs of the Field.  He was much gratified by the favourable press coverage the book received. While recovering wounded in Manchester in 1916 he received news of the Easter Rising in Dublin and the executions of nationalist leaders that followed it.  Dejected, in response he wrote his best-known poem in honour of the executed nationalist leader and a close friend, Thomas McDonagh. Despite having survived harsh service in Gallipoli and Serbia, Ledwidge was killed while serving in Flanders, at Boezinge, on 31 July 1917 during the Third Battle of Ypres.  He was aged 29, and was buried in Passchendaele. Despite the renown of his war poetry, of the two hundred plus poems that he wrote only nine actually discussed the Great War to any extent.

This edition published by Martin Brian & O'Keeffe, London, 1974, edited and introducted by Alice Curtayne ( who was also the author of a biography of Ledwidge)

HARDCOVER, LIGHT EDGEWEAR TO THE GREEN DUSTJACKET AND SOME FADE TO COVERS. 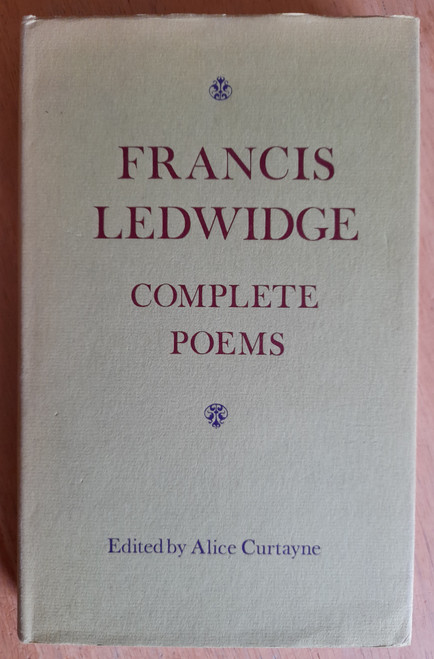