The Haunted Woman is a dark, metaphysical fantasy novel by British writer David Lindsay. It was first published in 1922. The work supposedly marked Lindsay's attempt to write a more "commercial" novel after the initial failure of his first work, A Voyage to Arcturus(1920), though he began it before that work was published. It was reissued by Gollancz in 1947 in this edition, as part of the 'Connoisseur's Library of Strange Fiction '

Part fatasy, part horror, and very much 'weird fiction' , like uch of Lindsay's work it does not fit neatly into a genre.

Condition - Book - Fair - solid in dark blue cloth, small format hardcover titles in embossed gilt to spine. Previous bookshop sticker on inside front cover. The main issue is heavy foxing to the front and rear pastedowns, as well as the preliminary pages. The book is not ex library, no inscriptions, binding tight, tape residue ghostmarks on rear pastedown, & to front pastedown ( inside cover)

Condition - Dustjacket - Fair ( would be graded Good if not for tape residue) At some point after initial purchase a previous owner strengthened the dustjacket edges with tape - this has meant that there is a .5 cm browning line of tape along the top and bottom edges of the jacket. ( most of the tape itself has peeled off and is not present)  General fade and dustiness to the standard Gollancz yellowjacket. War economy paper meant that 1940's Gollancz jackets tend to not stand up too well . The cover is now in a ( new) clear plastic jacket protector. 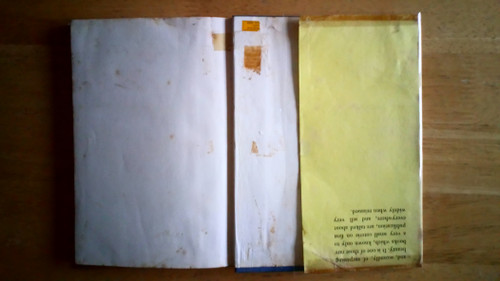