A facsimile edition, 1988, of teh original 1940 publication by George A Little, and originally published by the Old Dublin Society as Vol III, Number 2 of the Dublin Historical Record.

The Ouzel was a ship that disappeared after sailing to Syria in 1695, and which did not return , presumed lost. However, the ship reappeared in 1700, sailing into Dublin with a cargo of booty, presumed to be from piracy as well as trade. As the insurance had been paid out, the case was teh subject of much debate and conspiracy theories at the time. A society wa established to scrutinise future cases, and this was later subsumed into the Dublin Chamber of Commerce. In 1988, for the Millennium, the society was reestablished, and this book issued as part of the relaunch.

Signed by a Sinéad(? ) O'Doherty 1990 to the front title page - unclear if this personwas involved in teh publication. in blue card covers, maps of Dublin to endpapers, illustrations throughout. 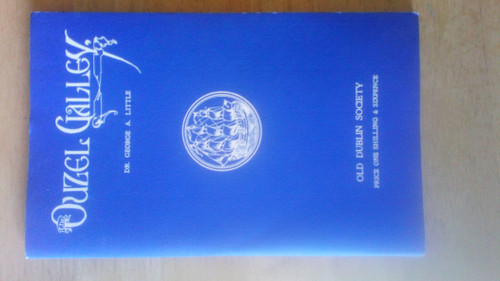