Second in the major new science fiction series from bestselling author Julian May. Two hundred years into the future, the great corporations of Earth dominate all life in our Galaxy. But their endless pursuit of wealth and power is about to open the door to a malevolent alien race, intent on engulfing the commonwealth of Human Worlds. In Perseus Spur, the disgraced Helly Frost was forced to return by his father as a last attempt to save the family's business from hostile takeover by a rapacious rival. Not only was Galapharma AC a threat to Rampart Starcorp, but also to the entire human race, for it was selling advanced technology to the alien Haluk, who desperately need new worlds to ease their teeming population. Helly faced murder, mayhem and gun-battles in space to foil Galapharma's first attack against Rampart. In Orion Arm, Helly and his oddly assorted companions attempt to capture a crucial witness to the Galapharma conspiracy, who has taken refuge on a hostile planet. Its insanely ambitious boss, Alistair Drummond, will stop at nothing in his quest for power, and Helly is marked for death as the two corporations continue to do battle.
Meanwhile, the Haluk follow their own appalling agenda, using human science to mutate their bodies, allowing them to infiltrate human society. Helly must find a way to alert the Human Commonwealth to the Haluk peril, while also saving his family from Drummond's increasingly desperate efforts to annhilate the Rampart Worlds. With this exciting mix of high-speed thrills, humour and intrigue, Julian May has combined an entertaining and compelling human conflict with classic SF adventure on a grand scale. 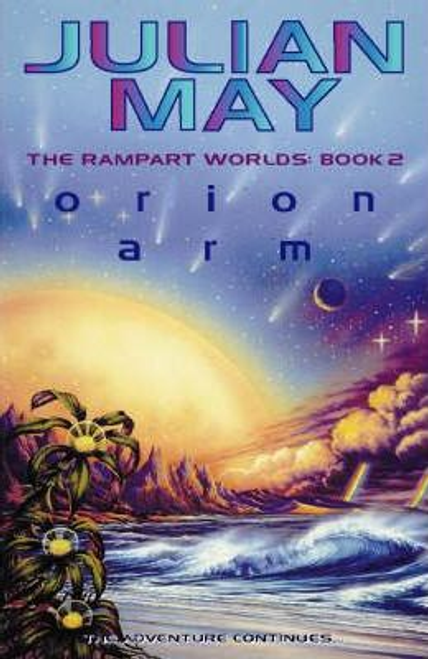