Martin Parr is a key figure in the world of photography and contemporary art. Some accuse him of cruelty, but many more appreciate the wit and irony with which he tackles such subjects as bad taste, food, the tourist, shopping and the foibles of the British. Parr has been collecting postcards for 20 years, and here is the cream of his collection - his boring postcards. With no introduction or commentary of any kind, Parr's boring postcards are reproduced straight. They are exactly what they say they are, namely boring picture postcards showing boring photographs of boring places, presumably for boring people to buy to send to their boring friends. All of them are shot in Britain, taking us on a boring tour of its motorways, ring roads, traffic interchanges, bus stations, pedestrian precincts, factories, housing estates, airports, caravan sites, convalescent homes and shopping centres. Some attempt to idealize their subjects, only to fail dismally. Others lack any apparent purpose or interest, but the resultant collection of photographic images is wholly compelling.

Boring Postcards is multi-layered: a commentary on British architecture, social life and identity, a record of a folk photography which is today being appropriated by the most fashionable photographers (including Parr), an exercise in sublime minimalism and, above all, a richly comic photographic entertainment. 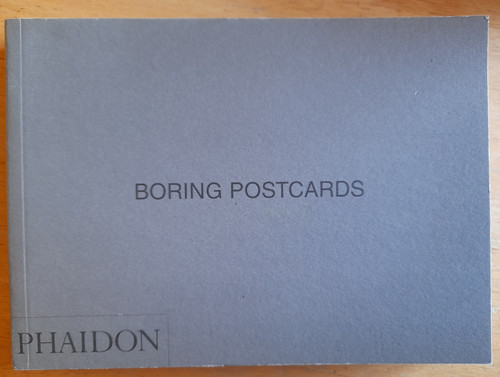