Raskin, Marcus / The Four Freedoms Under Siege : The Clear and Present Danger from Our National Security State (Large Paperback)

FDR's Four Freedoms-Freedom of Speech, Freedom to Worship, Freedom from Want, and Freedom from Fear-were presented to the American people in his 1941 State of the Union address, and they became the inspiration for a second bill of rights, extending the New Deal and guaranteeing work, housing, medical care, and education. Although the bill never was adopted in a legal sense in this country, its principles pervaded the political landscape for an entire generation, including the War on Poverty and the Great Society reforms of the 1960s. Furthermore, the ideas expressed in the Four Freedoms speech inspired the Universal Declaration of Human Rights. But since the late 1970s and early 1980s, these freedoms have been under assault, from administrations of both parties, economic pressures, and finally, the alleged requirements of national security. After 9/11, this process accelerated even more rapidly. The authors address the hard questions of individual freedom versus national security that are on the minds of Americans of all political stripes. They bring together the pivotal events, leaders, policies, and fateful decisions-often pathbreaking, more often ending in folly-that have subverted our constitutional government from its founding."You reach the inescapable conclusion," the authors write, "that the United States is a warrior nation, has been addicted to war from the start, and is able to sustain its warfare habit only by mugging American taxpayers, and believing in its mission as God's chosen." With a foreword by Barbara Ehrenreich, a journalist, activist, and the author of Nickel and Dimed: On (Not) Getting By in America. 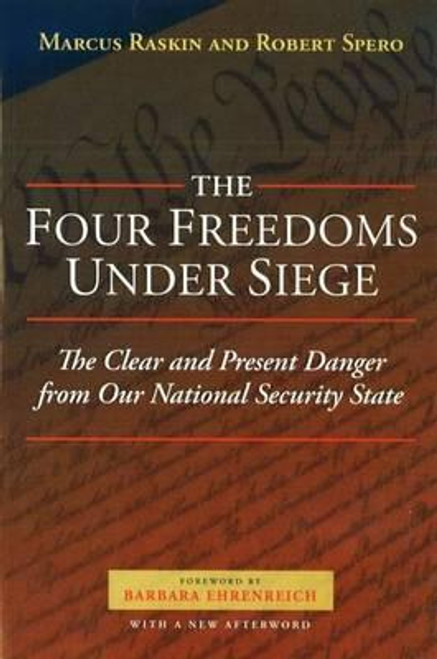 Raskin, Marcus / The Four Freedoms Under Siege : The Clear and Present Danger from Our National Security State (Large Paperback)