The Lensman series is a series of  7 linked science fiction novels by American author Edward Elmer Smith. The first [published origins of teh storioes date back to the mid 1930's , as short stories published for Amazing Stories magazine.

The first book - Triplanetary - explains the series background, which consists of an eons long  conflict between two alien races -  the Eddorians and the mostly benevolent Arisians. This conflict is carried out throughout the history of an oblivious humankind on Earth. The Arisians undertake a eugenics project to breed two human genetic lines that are intended to become the ultimate weapon in Arisia's cosmic war with Eddore.  The novel chronicles the founding of the Galactic Patrol by Virgil Samms, the first sentient being in our cosmos to wear the "Lens", a unique badge of authority which is actually a form of "pseudo-life" that grants telepathic powers to the defenders of Civilization.

This is a series of all 7 paperback novels in the series, republished by Panther SF UK 1977. Creasing to spines in all cases, spine colour varies - black blue and pale purple. Uniform design to all 7, cover art ( uncredited ) by the noted SF artist Chris Foss.

This seriesd was highly influential on later creations, ( such as Green Lantern, elements of the Star Wars Universe ( notably space piracy) - and the entire Space Opera subgenre. 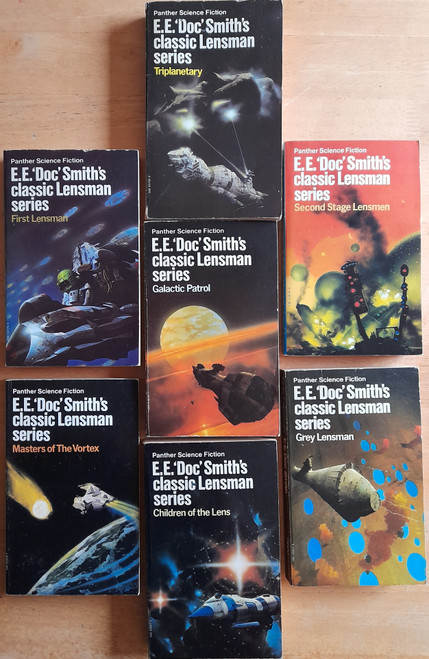