Annie Mary Patricia Smithson was an Irish novelist, poet and Nationalist. She was born into a prominent Protestant family in Sandymount in Dublin in September 1873.

Her mother and father were first cousins and her father died when she was young. About 1881 her mother married her second husband, Peter Longshaw, who owned a chemical factory in Warrington in Lancashire. As a result Smithson lived for a number of years in England. She disliked her stepfather and referred to him always as Mr Longshaw. There were five children from this marriage.

She was christened Margaret Anne Jane, but took the names Anne Mary Patricia (Annie M.P.) on her conversion to Catholicism.  She converted to Catholicism in March 1907 and became a fervent Republican and Nationalist. She became a member of Cumann na mBan and campaigned for Sinn Féin in the 1918 general election.

Smithson always had dreams of becoming a journalist but abandoned this ambition in order to train as a nurse and a midwife. She trained in London and Edinburgh, before returning to Dublin in 1900. In 1901 she took up a post as district nurse in Millton, Co. Down. There she fell in love with her colleague Dr James Manton, a married man. Deciding that a relationship was impossible, she left Millton in 1906. They kept up a correspondence until her conversion to Catholicism in 1907, when she burnt his letters. She lived in Newmarket on Fergus, Clare for a period of three years after this.

In  1916 he served with Ciumannn na mBan as medical officer

In 1917 she published her first novel, Her Irish Heritage, which became a best-seller. It was dedicated to those who died in the Easter Rising of 1916. Smithson published many journal articles but is best known for her romantic novels which have a strong Nationalist tone. In all, she published twenty novels and two short story collections. Other successful novels included By Strange Paths and The Walk of a Queen. Many of her works are highly romantic and draw on her own life experiences, with nationalism and Catholicism featuring as recurrent themes. Her novels were hugely successful and went into multiple reprints, and were published in the USA and the UK, - she was te Maeve Binchy of her day

In 1944 she published her autobiography, Myself – and Others.

From 1932 onwards she shared a house in Rathmines, Dublin with her stepsister and her stepsister’s family. She died on 21 February 1948 of heart failure at 12 Richmond Hill, Dublin and was buried in Whitechurch, County Dublin.

This is a 1988 Mercier Press reprint, in very good condition, almost as new, some light tanning to the page ends. 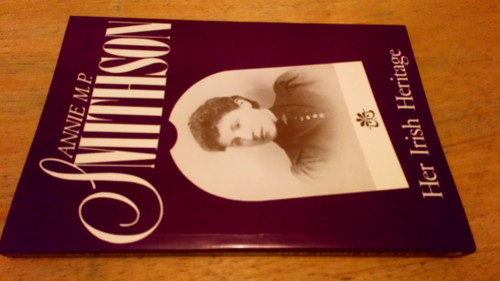