The Centaur is a novel by Updike, published by Knopf in 1963. It won the U.S. National Book Award. This is a hardcover 1st edition

The story concerns George Caldwell, a school teacher, and his son Peter, outside of Alton (i.e., Reading), Pennsylvania. The novel explores the relationship between the depressive Caldwell and his anxious son. George has largely given up on life; what glory he knew, as a football player and soldier in WW1, has passed. He feels put upon by the school's principal, and he views his students as hapless and uninterested in anything he has to teach them. Peter, meanwhile, is a budding aesthete who idolizes Vermeer and dreams of becoming a painter in a big city, like New York. He has no friends his age, and regularly worries that his peers might detect his psoriasis which stains his skin and flecks his clothes every season but summer. One thing George and Peter share is the desire to get out, to escape their hometown. This masculine desire for escape appears in Updike's famed "Rabbit" novels. Similarly, the novel's image of Peter's mother alone on an untended farm is one we later see in Updike's 1965 novel Of The Farm.

Heavy staining to the rear cover of the dustjacket, closed tears and associated creasing to upper edges of dustjacket, esp at spine. Now in a removable clear protective jacket protector. 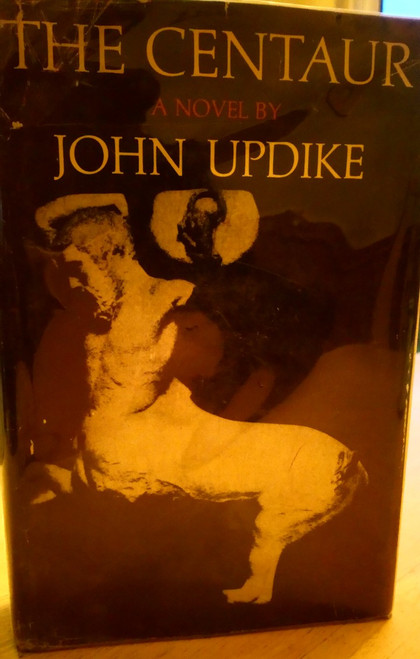