A paperback OMNIBUS Irish 1st thus edition ( Wolfhound Press, Dublin, 1985) of Mervyn Wall's classic novels of fantasy and satire, The Unfortunate Fursey and the sequel, The Return of Fursey
Originally published in hardcover in the UK and US in 1946 and 1948 this was the first omnibus edition
Condition - Good, light to moderate tanning to pages, binding is solid, spine shows slight central crease, no marks internally. Bumpos and softening to corners, cover art by Denis Brown.
Light tanning and edgewear to the page block, no inscriptions.
Hailed by critic E. F. Bleiler as a "landmark book in the history of fantasy," Mervyn Wall's classic The Unfortunate Fursey (1946) and the sequel The Return of Fursey ( 1948) were set in 11th century Ireland, where the forces of evil have launched an assault on the monastery of Clonmacnoise. Their task is made easier by the fact that one hapless monk, the simple-minded Brother Fursey, cannot manage to pronounce the necessary words of exorcism. When the other monks discover this, the unfortunate Fursey is expelled and sets forth on the first stage of his travels, accompanied by a fantastic procession of cacodemons, hippogriffs, imps, furies, and other dreadful creatures, not to mention Satan, the elegant gentleman in black who is their commander-in-chief'' 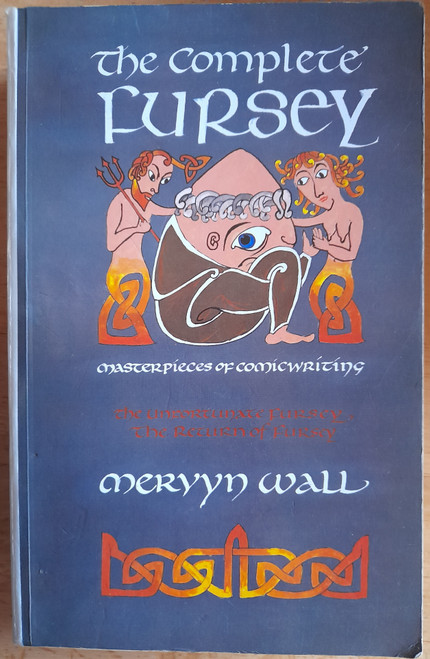