White, Patrick - 6 Book Lot ( Vintage Penguins) - The Vivisector, The Living and the Dead, The Solid Mandala, Voss, The Aunt's Story , The Burnt Ones

A lot of 6 vintage paperbacks ( all Penguins, from various eras and slighly differing cover designs) ALL WITH HEAVY SPINE FADE/ SUNNING - especially so on The Living and the Dead.

Voss ( Heavy edgewear, top edge of inside front endpaper is torn out - presumably had a previous owners name)

Set in nineteenth-century Australia, Voss is the story of the secret passion between an explorer and a naive young woman. Although they have met only a few times, Voss and Laura are joined by overwhelming, obsessive feelings for each other. Voss sets out to cross the continent, and as hardships, mutiny and betrayal whittle away his power to endure and to lead, his attachment to Laura gradually increases. Laura, waiting in Sydney, moves through the months of separation as if they were a dream and Voss the only reality.

The Living and the Dead

To hesitate on the edge of life or to plunge in and risk change -this is the dilemma explored in THE LIVING AND THE DEAD. Patrick White's second novel is set in thirties London and portrays the complex ebb and flow of relationships within the Standish family. Mrs Standish, ageing but still beautiful, is drawn into secret liaisons, while her daughter Eden experiments openly and impulsively with left-wing politics and love affairs. Only the son, Elyot, remains an aloof and scholarly observer - until dramatic events shock him into sudden self-knowledge.

Hurtle Duffield is incapable of loving anything except what he paints. The men and women who court him during his long life are, above all, the victims of his art. He is the vivisector, dissecting their weaknesses with cruel precision: his sister's deformity, a grocer's moonlight indiscretion and the passionate illusions of his mistress, Hero Pavloussi. It is only when Hurtle meets an egocentric adolescent whom he sees as his spiritual child does he experience a deeper, more treacherous emotion.

In The Solid Mandala Patrick White draws a telling and touching portrait of twin brothers. Waldo is the competent man of reason, he sees himself as the superior intellect. Arthur, accepted as a half-wit is the innocent, God's fool, loving and outgoing in a blundering way. As they compete with and care for each other through half a century, their lives are inextricably intertwined - the two sides of a man's nature forming a totality.

With the death of her mother, middle-aged Theodora Goodman contemplates the desert of her life. Freed from the trammels of convention, she leaves Australia for a European tour and becomes involved with the residents of a small French hotel.

But creating other people's lives, even in love and pity, can lead to madness. Her ability to reconcile joy and sorrow is an unbearable torture to her. On the journey home, Theodora finds there is little to choose between the reality of illusion and the illusion of reality. She looks for peace, even if it is beyond the borders of insanity.

The Burnt Ones ( Short Stories)

Eleven stories to which Patrick White brings his immense understanding of the urges which lie just beneath the facade of ordinary human relationships, especially those between men and women. A girl beset by her mother's influence, who marries her father's friend. . . A young man strangely moved into marriage with a girl like the mother who never understood him. . . A pretty market researcher who learns the ultimate details of love with a difference. . . The collector of bird-calls who unwittingly records the call of a very human nature. 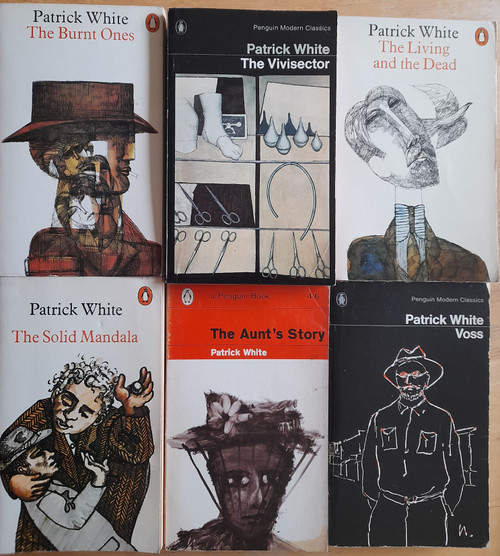 White, Patrick - 6 Book Lot ( Vintage Penguins) - The Vivisector, The Living and the Dead, The Solid Mandala, Voss, The Aunt's Story , The Burnt Ones