Wassily Kandinsky was born in 1866 in Russia. He obtained his law degree, and was offered a professorship in law at the University of Dorpat. At age 30, he decided to "chuck it all," at least in terms of a "9-5 career," and elected to pursue his artistic talents. He lived in turn-of-the-century Munich, and was a key figure in the artistic colony there. He would have taken two other nationalities, German and French, before he died in Paris, at the end of 1944. The upheavals of the first half of the 20th century affected him. At the beginning of World War I, he would move back to his native Russia. In 1921; he felt he was out of step with the Bolshevik leadership (the term "decadent" was no doubt bandied about) and so he moved back to Germany. He would teach at the very influential Bauhaus school, which promoted the idea that a synthesis could be achieved between the designers and the various artistic fields, including art, music, and architecture. When the Nazis came to power in the early `30's, once again he had to flee (with the term "decadent" never being far behind him), this time to Paris. His principal contribution to the world of art is that he was the first painter to produce purely abstract works of art. He believed that pure color and abstract shapes could inspire deep emotions in the viewer, similar to those produced by musical tones. This "Colour Library of Art" book commences with a good 20 page biography of Kandinsky.

The true strength of the book is its 48 full-colour plates, one per page. They are arranged chronologically, to underscore his artistic development. The earlier works are "impressionistic," (he had met Monet in Moscow), and are inspired by Russian folk tales, and folk art, particularly from the Volgada region. A notable example is plate 2, "The Blue Rider." The "Russian Beauty in a Landscape", plate 4, was painted in 1905, and is one of the best examples of his "Romantic" compositions. In 1908, Kandinsky left the politics of the Munich artistic world, and moved, with his mistress, Gariele Munter, to the village of Murnau, in Upper Bavaria. Plate 11, is an excellent example of this period; he abandoned "natural colors" and embraced vivid reds, yellows, and blues. Plate 15 is his first completely non-figurative painting, completed in 1910, and fulfilling his theories espoused in his classic work  'Concerning the Spiritual in Art'.   Although a few of the subsequent paintings contain recognizable figures, almost all of the remainder are pure abstractions. Plate 27 is a particular favorite. I am also struck, living in the American Southwest, with parallels with the art of American Indians, notably plates 34 and 47.

The "Colour Library of Art" series is an excellent introduction, and ready reference, for the aspiring artist and non-artist alike. In this work, each colour plate is accompanied by a substantial description of the work, and its significance. 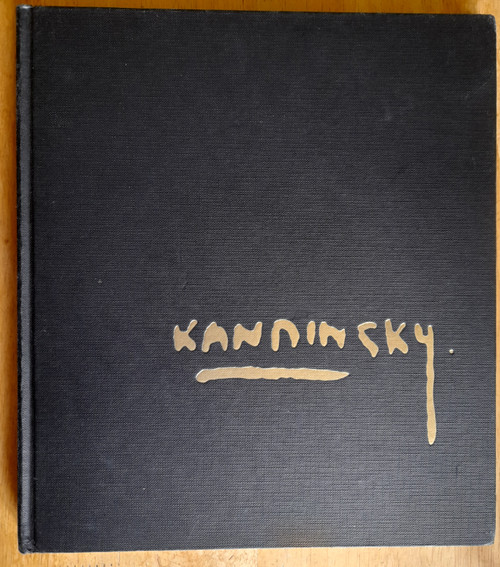