The GAA is a hugely significant aspect of the Irish consciousness and plays an influential role in Irish society that extends far beyond the sport itself. In popular imagination and experience, the GAA is often evoked in terms of its objects: medals passed down from generation to generation, jerseys worn in All-Ireland finals, Michael Cusack’s blackthorn stick, a pair of glasses damaged during the massacre in Croke Park on Bloody Sunday.

The objects of the association range from the informal to the formal and are key to the construction of both personal and official histories.
From a fifteenth-century horsehair sliotar to a tweed camogie dress, Trevor Giles’s sleeveless jersey and Brian Cody’s baseball cap, all corners of the GAA world, personal and official, are explored and celebrated in A History of the GAA in 100 Objects.

This book repositions a range of objects, originating from the GAA, into the expanded field of Irish history by placing them as central to our understanding of past ideas and experiences.
A History of the GAA in 100 Objects acts as a signpost to significant moments in GAA history, offers fresh perspectives on a previously overlooked area of enquiry and presents new ideas not available elsewhere.

Like all the best ideas, it is wonderful in its simplicity and already Siobhán Doyle’s book has been shortlisted for awards and received widespread and richly deserved praise.

Since its arrival in the late 90s the GAA Museum in Croke Park has played an important role at telling the story of the great games and the great players and looked at new ways to tell the story of the GAA beyond the obvious displays of cups and medals.

As a former member of the GAA Museum staff in Croke Park, historian Siobhán Doyle marries her expert knowledge to her obvious passion for Gaelic games in what is a winning combination.

The result is a pure joy of a collection of items that in their own way chart the history and progress of the GAA for almost 140 years but in a unique and captivating way – carefully choosing items that are invaluable on their own but also part of the wider tapestry of the Association and its place in Irish life.

You don’t need any interest in the GAA to find this book a treasure-trove of interest. For those who know and love the games, they are guaranteed to learn something new and gain a deeper insight and appreciation for some of the things we take for granted.

It’s all here. From the ancient vessel that inspired the distinctive design of the MacCarthy Cup, the early examples of hurling helmets and protective eye goggles, to the loser’s plaque that Joe Kernan used to inspire Armagh footballers in their half-time team talk in the 2002 final with Kerry and on to Brian Cody’s cap. The lace that Mick Hogan gave to his teammate Bill Ryan to help him secure his boots before the Bloody Sunday match of 1920 features alongside other deeply personal and significant objects from private collections as well as examples of medals and letters that come from the GAA’s own archives and the National Museum.

It is a beautiful book. Expertly presented and laid out in a manner that suits a casual dip or a deeper trawl, this is an important addition to the GAA literary archive.

( above from the book review at www.gaa.ie by Cian Murphy) 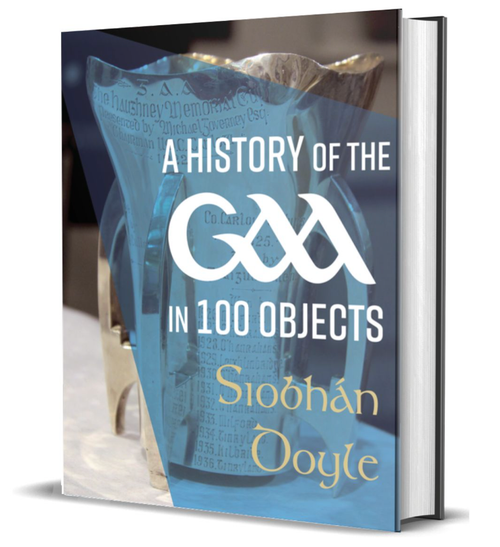