Schiller's philosophical work was particularly concerned with the question of human freedom, a preoccupation which also guided his historical research, such as on the Thirty Years War and the Durch Revolt, and then found its way as well into his dramas: the Wallenstein concerns the Thirty Years' War, while Don Carlos addresses the revolt of the Netherlands against Spain.

This is a single volume ( but complete in itself) of a collected works of Schiller, published 1847 in Stuttgart. It is signed by james Drummond 9 unitarian minidster, and his daughter Mary A Hutton ( an associate of Patrick Pearse, Celtic and linguistics scholar and funder of Scoil Éanna) , who visited Pearse in Rosmuc and whose house in Belfast Pearse visited on many occasions.

The book is in good condition, marbled boards covers, the embossed titles on the spine are faded on the upper panel, attractive gilt finish , back gutters are weakened.

BOOK IS ENTIRELY IN GERMAN - in the lettered 'gothic' script. 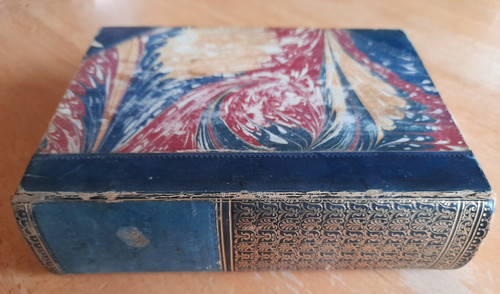