4 period historical romances, all in uniform sized paperbacks, , light edgewear to all, and moderate sun fade to spines.

In the perilous world of kings and queens, one woman matches ambition with loyalty and ruthless intrigue with all-consuming passion in this gripping historical fiction novel.

London, 1673. With her family ruined by war, penniless thirteen-year-old Sarah Jennings is overjoyed to be chosen as a maid of honor at the bawdy Restoration court of Charles II. She soon wins the trust of Lady Anne of York, a lonely princess who becomes one of her staunchest allies. And though Sarah's beauty stirs the desires of jaded aristocrats, she wants a grander future for herself than that of a pampered mistress. Only one man possesses ambition and passions that match her own: John Churchill, a dashing young military hero. He would ask for her hand--and win her heart for a lifetime...

But Whitehall Palace is ripe with ever-shifting alliances and sexual scandal, and Sarah will need all her cleverness to succeed. Titles, power, and wealth are the prizes, while an idle whisper in the wrong ear can bring a cry of treason, and the executioner's ax. Will Sarah's loyalties--and her dreams--falter when a king is toppled from his throne and a new queen crowned? And will she dare risk everything when her one true love is tested by a passionate, dangerous obsession?

Brimming with the intrigue and sensuality of one of history's most decadent courts, Duchess brings to vivid life the story of an unforgettable woman who determines her own destiny--outspoken, outrageous, but most of all true to herself.

The King's Favourite : A Novel of Nell Gwyn and King Charles II - 2008

Nell Gwyn has never been a lady, nor does she pretend to be. Blessed with impudent wit and saucy beauty, she swiftly rises from the poverty of Covent Garden to become a sensation in the theater. Still in her teens, she catches the eye of King Charles II, and trades the stage for Whitehall Palace-and the role of royal mistress.

Even though she delights the king, she must learn to negotiate the cutthroat royal court, where ambition and lust for power rule the hearts of all around her. For beneath her charm and light-heartedness, Nell has her own ambition-to become no less than the king's favorite.

The French Mistress : A Novel of the Duchess of portsmouth and King Charles II - -2009

The daughter of a poor nobleman, Louise leaves the French countryside for the court of King Louis XIV, where she must not only please the tastes of the jaded king, but serve as a spy for France. With few friends, many rivals, and ever-shifting loyalties, Louise learns the perils of her new role. Yet she is too ambitious to be a pawn in the intrigues of others. With the promise of riches, power, and even the love of a king, Louise creates her own destiny in a dance of intrigue between two monarchs-and two countries.

The Countess and the King : A Novel of THe countess of Dorchester and King James II - 2010

Katherine Sedley lived by her own rules and loved who she pleased- until she became the infamous mistress of King James II...

London, 1675: Born to wealth and privilege, Katherine is introduced to the decadent court of King Charles II, and quickly becomes a favorite from the palace to the bawdy playhouses. She gleefully snubs respectable marriage to become the Duke of York's mistress.

But Katherine's life of carefree pleasure ends when Charles II dies, and her lover becomes King James II. Suddenly she is cast into a tangle of political intrigue, religious dissent, and ever-shifting alliances, where a wrong step can mean treason, exile, or death at the executioner's block. As the risks rise, Katherine is forced to make the most perilous of choices: to remain loyal to the king, or to England. 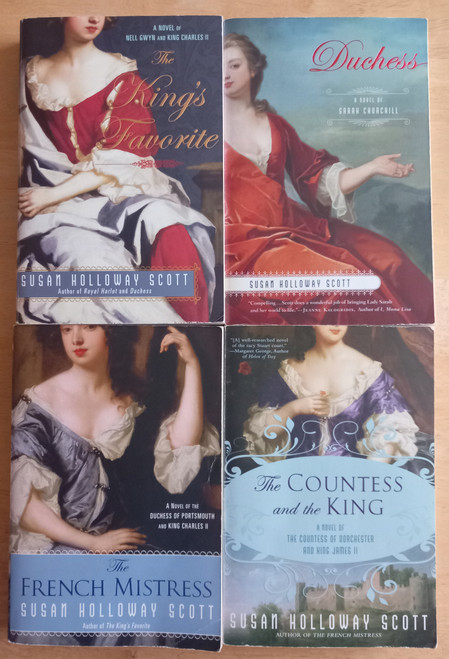