From the author's own description -

The book is a collection of approximately 50 feature stories I’ve written during my five years (and happily counting) with The Kerryman, and they include interviews with well-known figures, not-so-well-known figures who deserve to be well-known and, mercifully, not a Diary entry is to be found anywhere.

Every story means something to someone, and The Kerryman journalist Tadhg Evans tells those stories so well.

Over the past five years, Tadhg has written countless stories concerning sport, culture, history, and other human-interest stories from around Kerry, and for A Storied Kingdom, he hand-picks the very best of those articles.

The finished product is a unique collection that captures the essence of Kerry through interviews with legendary “greats” or profiles of lesser-known individuals whose stories deserve to be told.

Anyone with any love for or fascination with Ireland’s most-fabled county will enjoy these features, interviews, profile pieces, and analyses, as well as other articles that don’t fall into a particular category but certainly belong in the unique blend that is A Storied Kingdom.

Tadhg’s magic ensures each piece works powerfully as a stand-alone read but, as a collection, the journey through these writings is never anything less than gripping.

The reader will find an eclectic mix of interviews, tales from the four corners of Kerry that will fascinate. All put together with care and respect for the subject. Kevin Hughes, Editor, The Kerryman.

Tadhg Evans hails from Lios Póil in County Kerry and attended school locally at Scoil Naomh Eoin Baiste and later Pobalscoil Chorca Dhuibhne in Dingle.Thereafter, he went on to study Journalism at NUI Galway in 2016 and began his reporting career at The Kerryman in May of that year.He has since gone on to become an award-winning journalist having picked up a Local Ireland Media Award in the Feature Story of the Year category. He won that prize in 2020 on the back of an in-depth investigation into the disappearance of Abbeyfeale native Paddy Moriarty from a tiny Australian Outback village three years ago.In 'A Storied Kingdom', Tadhg's first book, he combines many of his passions, not least anything sport-related or Kerry-related.As a board member of CLG Lios Póil himself, his knowledge of the GAA world shines through whenever he commits pen to paper on the subject. Hailing as he does from the Corca Dhuibhne Gaeltacht, he is a fluent Irish speaker and an advocate of a language that seems to face threats from all angles. More than anything else, though, he loves meeting people who have a story to tell - and that's exactly what drew him towards a life in journalism to begin with.

Tracked courier delivery within Ireland is included in the cost. 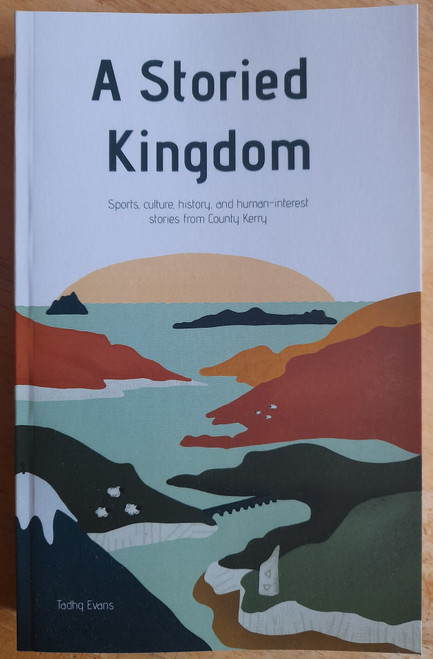