Two unlikely people form an unexpected bond in bestselling author Karen Joy Fowler's captivating historical novel--a New York Times Notable Book. When black cloaked Sarah Canary wanders into a Chinese labor camp in the Washington territories in 1873, Chin Ah Kin is ordered by his uncle to escort "the ugliest woman he could imagine" away. Far away. But Chin soon becomes the follower. In the first of many such instances, they are separated, both resurfacing some days later at an insane asylum. Chin has run afoul of the law and Sarah has been committed for observation. Their escape from the asylum in the company of another inmate sets into motion a series of adventures and misadventures that are at once hilarious, deeply moving, and downright terrifying.

"Powerfully imagined...Drop everything and follow Sarah Canary....Humor and horror, history and myth dance cheek to cheek in this Jack London meets L. Frank Baum world....Here is a work that manages to be at the same time (and often in the same sentence) dark and deep and fun."--The Washington Post Book World

Karen Joy Fowler, a PEN/Faulkner and California Book Award winner, is the author of six novels (two of them New York Times bestsellers) and four short story collections. She has been a Dublin IMPAC nominee, and was shortlisted for the Man Booker Prize in 2014. She lives in Santa Cruz, California.

This was the author's debut novel, published by Henry Holt, USA, 1991

The Washington Territory, Winter, 1873: the tail end of the Year of the Monkey. The woman dressed all in black who appeared without warning in the forest cleaning was of indeterminate age, small and hugely ugly. A few coarse black hairs sprouted beneath a nose that was big even for a white woman. Her hair was cropped, her dress torn, and she was babbling in some incomprehensible tongue. Chin Ah Kin thought she might be a ghost lover---an immortal sent by the gods to enchant him. His more practical uncle thought otherwise: A white woman in a Chinese railway workers' camp could only be trouble. He ordered Chin to return her to the white world.

Traveling into that world, Chin and the mysterious woman acquire an entourage of sorts. There is B.J., who is not at all sure he physically exists but is quick to join Chin and the woman as they make their escape from the local lunatic asylum. There is Harold, who himself claims to be immortal because he didn't die at Andersonville and who covets the woman for his traveling freak show. And there is Adelaide, brave and foolhardy, preaching female orgasm in rowdy mining camps and amid roughneck loggers, certain the woman is a victim of love. Finally, there is Chin: shangaied as coolie labor from his home in Canton, longing to return to China, fluent in three languages but addressed by the white world in none.

Hovering over them all is Sarah Canary, who is all things to all who seek her: murderess and madwoman, wraith and vampire, ghost lover and immortal---a shape-changer who floats and bucks through this amazing American quest novel in which the seekers---a ragtag band of loners and losers, the castoffs of polite society---are united by their separate visions of a mercurial spirit real enough to draw blood, ephemeral enough to evanesce like vapor.

Sarah Canary is a work of literary magic that speaks to us across a hundred years of American experience, entertaining us with its droll quest even as it ambushes us with its insights into the madness of the sane, the ferocity of the civilized, and the sad vulnerability of the dispossessed. It is that rarity: a novel of ideas and wit that can raise tears as well as laughter.

--from the book jacket 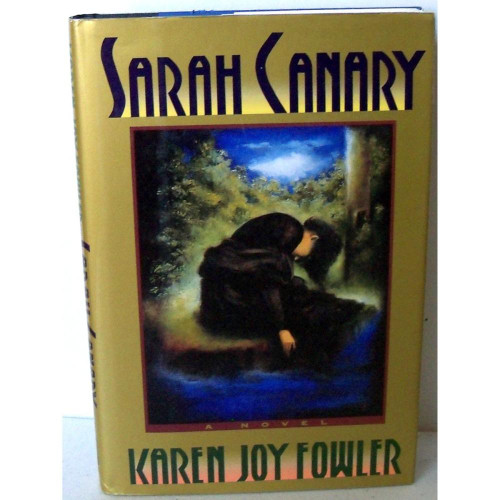