William S. Hart was a major silent movie cowboy star, one of the first "greats" in the genre, and he was also the real deal. As this autobiography emphasizes, he grew in the northern midwest. His family was dirt poor, his mother in bad health, his father doggedly pursuing work in constructing and maintaining flour mills--"white gold"--with the hope of having one of his own. Hart's playmates were usually Sioux children. From them he learned the language and how to hand talk. By his late teens, his interest turned to acting. He knew he was unsophisticated, so he made an active effort to learn how to handle society and craft. He starved and scraped by in theater for years, supporting his mother and sisters as he could. When he saw a cowboy movie for the first time, he was horrified by the inaccuracies. He set out to correct them himself, both in print and in his film career.

Published by Lakeside Press Classics 1994 , as issued without dustjacket in brown cloth with titles in gilt to spine. Illustrated. 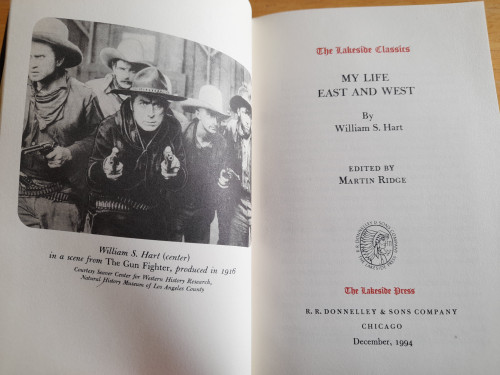