After his brush with death Ross O'Carroll-Kelly - schools rugby legend, award-winning author and lover of the ladeez - is back with a renewed lust for life - all thrillingly revealed in "The Shelbourne Ultimatum". Ross wakes up from his coma to find a country that has changed beyond recognition. Shrewsbury Road has become a ghost estate. Marks and Spencer are selling microwavable coddle. And a Euro discount store is about to open in the Powerscourt Townhouse Centre. And he was only unconscious for ten days. But never mind all that. The main thing is that whoever tried to kill him missed all his vital organs. And having had such a lucky escape Ross vows not to waste another minute of his life. There are thousands of women out there and just one Ross to go around. He needs to focus. Of course, life gets in the way. He has a daughter who hates him, a son who is growing up way too fast and a soon-to-be-ex wife who is resorting to increasingly desperate measures to stop the bank from repossessing the house. Oh, and the Gords - get this! - think he's lying to them. Lying? Ross? "Ross' misadventures and on-the-nose observations never fail to provoke a laugh-out-loud reaction ...bursting at the seams with spot - on parody". ("Irish Times"). "Will leave you with pains in your cheeks from laughing". ("RTE Guide"). "The Shelbourne Ultimatum" is the twelfth novel in Paul Howard's "Ross O'Carroll-Kelly" series". Ross books have sold half a million copies, are annually nominated for the Popular Fiction prize at the Irish Book Awards - where they have twice won the prize - and are also critically acclaimed as satirical masterpieces. Titles include: "The Curious Incident of the Dog in the Nightdress", "Should have Got off at Sydney Parade", "This Champagne Mojito is the Last Thing I Own", "Rhino What You Did Last Summer", "NAMA Mia! and The Oh My God Delusion". The last of these was chosen as Ireland's favourite book in Eason's 125th birthday poll. 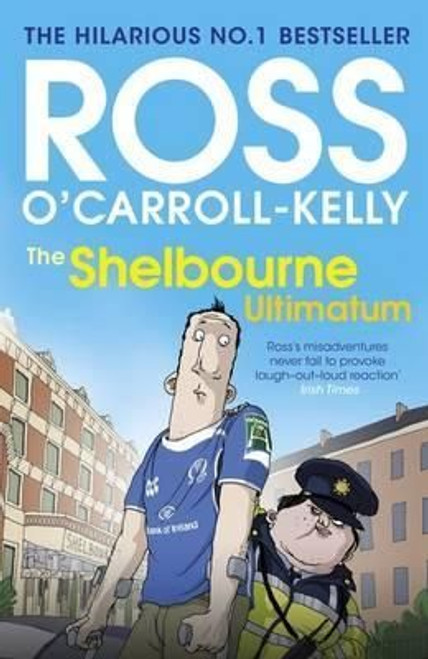