First published in 1937, and unavailable in the main since then, this book is an essential and unparalled eye-witness account of the beginning of the Spanish Civil War. Peadar O'Donnell was a veteran campaigner, with an established reputation for his republican, socialist, trade union and land reform activity. His experience in Spain led him to become instrumental in the organising of Irish volunteers to join the International Brigades.

This edition, the first available for over 80 years, has been published by Friends of the International Brigades in Ireland - FIBI, and has a new introduction by Donal Donnelly and afterword by trade unionist Harry Owens.

Standard format paperback. ISBN is on an adhesive panel to the back covers

Donegal native Peadar O'Donnell ( 1893-1986) was a man of many talents - author, teacher, trade unionist, peace activist, republican, and much more besides - being involved in a host of campaigns throughout his long life , from land reform in the Irish Free State to Anti- Apartheid in the 1980's.

O'Donneel travelled to spain ( in theory to write a book) with his wife in July 1936, where his vist coincided with teh outbreak of Civil war. His own background meant he was greatly interested in teh reforms attempted by teh newly elected Republican Government, and he had travelled and conversed with workers, land labourers and all who he met. He witnessed the early street fighting in Barcelona, and after briefly returning home to speak for Spain in Ireland, he returned to Madrid.

His style is that of a war correspondent, and he conveys a real sense of 'what it was like to be there'. 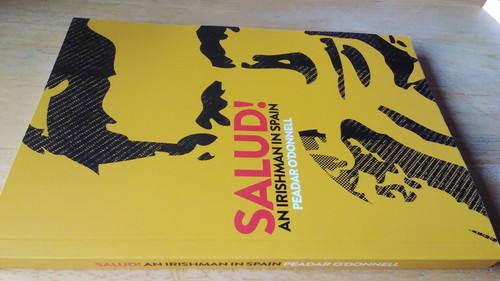