His books of Irish music are famous worldwide, yet the amazing life story of Francis O’Neill (1848-1936) is not as well known. At sixteen he became a sailor, leaving Cork to travel the world. By twenty, he had circumnavigated the globe having many adventures, including surviving shipwreck on a remote tropical island. He settled in Chicago with his new wife Anna. They joined many immigrants looking for work just as the city was visited by catastrophe: The Great Fire of 1871.

He struggled in those early years working as a packer in the cruel conditions of the Chicago stockyards. Tragedy visited the young O’Neill family: of their ten children, only four survived to adulthood. In 1873, he received a break when hired as an officer on the burgeoning police force. He was only a month on the job when shot by a criminal he still managed to arrest. He carried the bullet lodged next to his spine for the rest of his life. He went on to serve twice as police chief, all the time gathering tunes and musicians, some of whom he hired to the force.

In 1903, he published his first book: O’Neill’s Music of Ireland. He was to follow this first book of tunes with several more. However, this musical and professional success was tarnished by terrible personal loss. In 1904, his only son Roger died at eighteen from spinal meningitis. Grief- stricken, Francis swore he would never play music in the house again. He retired from the force and buried Rogers in the family mausoleum a year later. Subsequent generations of Irish musicians, to this day, openly admit their debt and gratitude to the man who saved Irish music.

Originally from Kerry, Ronan O’Driscoll moved to Chicago as a teenager in the 1980s. He returned to Ireland to study at University College Dublin where he graduated with a Masters in English literature. Ronan currently lives with his wife and children in Nova Scotia, Canada. Like O’Neill, Ronan found Irish music an important way to keep connected with his roots. It was through learning fiddle tunes that he came to know of Francis O’Neill’s compelling story. Chief O’Neill is his second novel.

“A magical blend of history and fiction that encapsulates the life of one of Ireland’s most remarkable musical diaspora.”— MICHELLE WALSH-JACKSON, novelist and travel writer.

“Ronan O’Driscoll’s lyrical prose is breathtaking in its dedication to the details of the moment. Chief O’Neill is the story he was meant to tell”.— GERARD COLLINS, novelist.

Tracked courier delivery is included in the cost ( within Ireland) 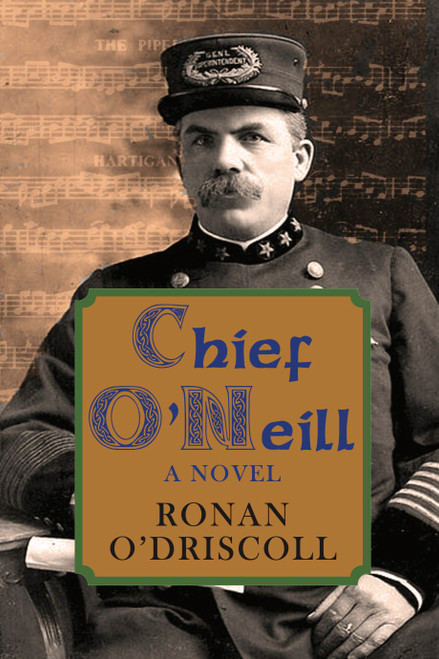