On 1 June 1921, at the height of Ireland’s War of Independence, a cycling patrol of members of the RIC was ambushed by members of the IRA at Ballymacandy, between Milltown and Castlemaine in County Kerry. After an hour of fighting, four police officers lay dead and another died a day later, among them a father of nine children.

The group of IRA assailants included some of the most high-profile figures in Ireland’s ‘Tan War’, men like Dan Keating, Jack Flynn, Dan Mulvihill, Billy Myles and Johnny Connor, but also lesser-known figures, including members of the local Cumann na mBan. Their actions were condemned from the pulpit and an official enquiry tried to discredit the local doctor who tended to the dying men.

This book comes on the centenary of an ambush that continues to resonate in its community and in a county in which the battle with Crown forces was more virulent and violent than most. Drawing on newly published witness statements and previously unpublished official records, Ballymacandy details what happened the five men who died and those who led the attack against them and sets the incident against the backdrop of the wider revolutionary struggle in the county.

ABOUT THE AUTHOR
Owen O’Shea, from Milltown, Co. Kerry, is a historian and author of several books on history and politics in his native county. A former press adviser to the Labour Party and a journalist for many years, he is the author of Heirs to the Kingdom: Kerry’s Political Dynasties (2011) and co-author of A Century of Politics in the Kingdom: A County Kerry Compendium (Merrion Press, 2018). He was co-editor of a history of Kerry and the Easter Rising in 2016. O’Shea currently works as Media, Communications and Customer Relations Officer with Kerry County Council and is an Irish Research Council-funded PhD student at University College Dublin, researching electioneering and politics in Kerry in the decade after the Civil War. 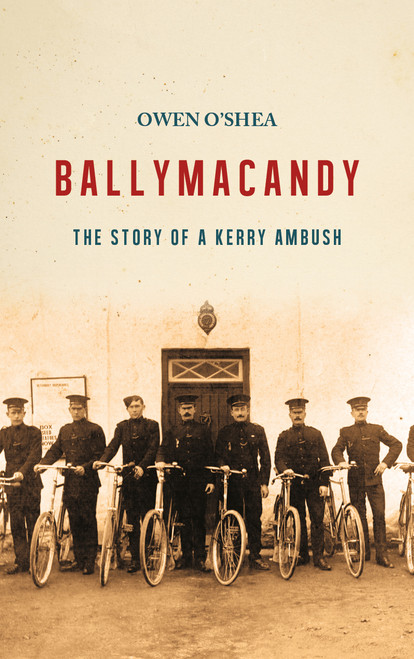