Bios - UK paperback edition, 1999. Tanning to page block, light edgewear. Fade to spine.
It is the 22nd century. Interstellar travel is possible, but colossally expensive, so humankind's efforts are focused on the only nearby Earth-like world. Isis is rich with plant and animal life, but every molecule of it is spectacularly toxic to humans. The whole planet is a permanent Hot Zone. Zoe Fisher was born to explore Isis. Literally. She has been cloned and genetically engineered to face its terrors. But there are secrets implanted within her that not even she suspects -- and the planet itself contains revelations that will change our understanding of life in the universe.

Darwinia US Tor First Edition, 1999, Light fade to spine.
In 1912, history was changed by the Miracle, when the old world of Europe was replaced by Darwinia, a strange land of nightmarish jungle and antediluvian monsters. To some, the Miracle was an act of divine retribution; to others, it is an opportunity to carve out a new empire. Leaving an America now ruled by religious fundamentalists, young Guilford Law travels to Darwinia on a mission of discovery that will take him further than he can possibly imagine to a shattering revelation about mankind's destiny in the universe.

The Chronoliths - Tor US First paperback edition , 2002. Excellent condition.
ne day in Thailand, 21st-century slacker Scott Warden witnesses an impossible event: the violent appearance of a 200-foot stone pillar. Its arrival collapses trees for a quarter mile around its base. It appears to be composed of an exotic form of matter. And the inscription chiseled into it commemorates a military victory sixteen years hence.As more pillars arrive all over the world, all apparently from our own near future, a strange loop of causality keeps drawing Scott into the central mystery and a final battle with the future. 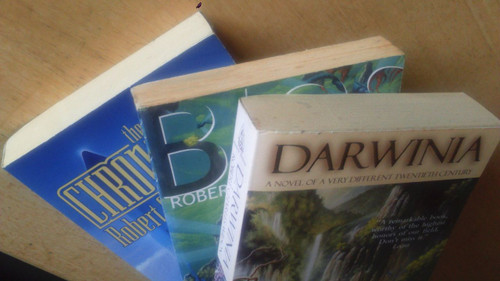