Feardorcha Ó Conaill or Frederick William O'Connell (1876 – 1929) was a clergyman, academic, lecturer  writer, and was best known translator to and from Irish often under the pen name Conall Cearnach (after the legendary Ulster hero . He is known especially for editing the work of Peadar Ó Laoghaire.

Ó Conaill was born in Newtown, An Líonán, Conamra , county Galway to William Morgan O'Connell, into a Church of Ireland family. William's parents were fluent Irish-speakers who taught him the language at the age of six. He attended TCD from 1891 and was ordained in 1902. He became rector of Achonry in 1907 and afterwards obtained a post as lecturer in Celtic languages and literature at Queen's , Belfast

Ó Conaill married Helen Young in 1905; they had three sons before she died of tuberculosis in 1925 after the couple moved to Dublin. He later married Marcella Graham, a French Catholic, and may have informally converted to Catholicism. He became assistant director of Radio Éireann in 1927, months before he was struck and killed by a bus while hailing a tram on Lansdowne Road, Dublin.

He was a prolific translator, from Irish to engliash, as well as from a wide range of languages - Persian and Greek among them.

This is a collection of essays on a diverse range of subjects - classics, Animals, history, aauthors, university life, sleep and dreams, and much more.

Condition - lacks any dustjacket , internally unmarked, the base of teh spine shows split ( visible in photo) but binding is solid. 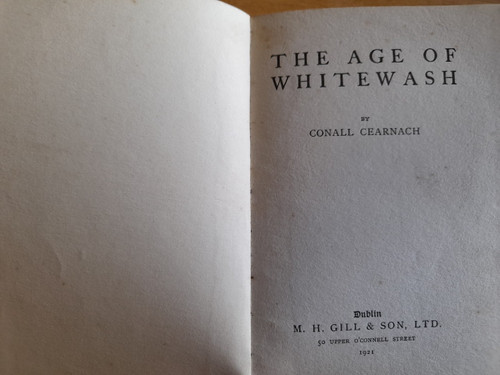