Golf fans will not forget the 39th Ryder Cup in a hurry. Staged at the Medinah Country Club just outside of Chicago, the 2012 event has already gone down as the most remarkable competition in its 85-year history.

The American team had home advantage, and a golf course unapologetically set up to suit its own players. Supported by tens of thousands of loud and proud fans, the USA's star-studded line-up dominated the first two days and ended the Saturday with a seemingly unassailable 10-6 advantage. No away team had ever won the Ryder Cup from such an unpromising position.

Sunday was singles day, traditionally the forte of American teams. The situation looked bleak, especially when European team member and number 1 golfer in the world, Rory McIlroy, very nearly missed his tee-off time. Yet slowly but surely, the European team - who had top-loaded their line-up in one last throw of the dice - started to turn the scoreboard blue. With inspirational captain Jose Maria Olazabal stiring European blood with thoughts of the late Ryder Cup magician Seve Ballesteros (whose silhouette was emblazoned on the players' sweaters and bags), the tide turned and the previously dominant American players started to crumble in the face of the onslaught. Suddenly European players were holing miraculous putts to win holes out of the blue. Something very special was happening.

When German Martin Kaymer sank his putt on the eighteenth green to clinch the point that retained the Ryder Cup, the most astonishing comeback in the event's long and distinuished history was complete. Miracle at Medinah is the compelling narrative of those amazing three days in Illinois, a fitting chronicle of an unbelievable sporting story. 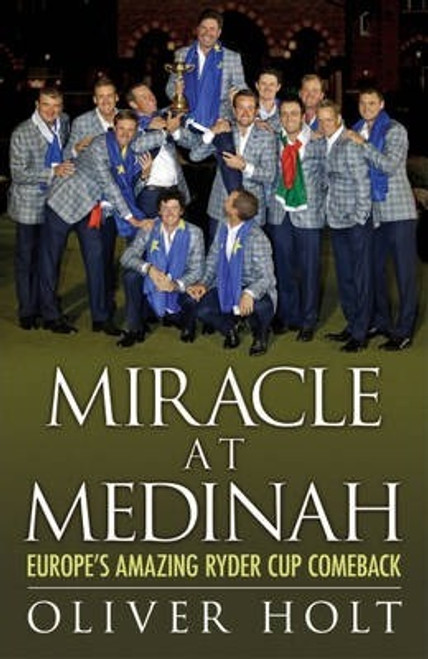