West, Patrick / Beating Them at Their Own Game : How the Irish Conquered English Soccer (Medium Paperback)

Beating Them at Their Own Game charts how Irish players, managers and business people have come to have a disproportionate influence on soccer in the UK. An entertaining survey of the growing prominence of Irish figures from the post-war period to the present day, it chronicles the period of time in which soccer in Ireland has evolved from being derided as a foreign and essentially Anglo-Saxon game that no true Irishman would play to a beloved sport that inspires almost religious following. Not only have the Irish taken soccer to their heart, they have taught the nation that gave the game - the same nation that ruled them for 800 years - how to play it. From Pat Jennings to Martin O Neill, Kevin Moran, Frank Stapleton, David O'Leary, Mick McCarthy, to Niall Quinn and Roy and Robbie Keane, in Beating Them at Their Own Game Patrick West documents how Irish players have in many ways changed and shaped English soccer over the last forty years. Launched by former Republic Of Ireland manager Eoin Hand, the book also deals with the success of Northern Irish players - George Best, Sammy McIlroy and Norman Whiteside - the consummation of Ireland's ascendancy with their victory over England in the 1988 European Championships; Tony Cascarino's admission that he is not Irish; and the debates about how Irish the international team was and is; and the way in which the favor has been returned, with Jack Charlton and now Bobby Robson coaching the Irish side. On another level it is a microcosm of how Ireland and Anglo-Irish relations have changed in recent years; how Ireland has become more multiracial and tolerant of foreign games; and how the English have lost their ancient hostility towards the Irish and come to view them increasingly as allies and neighbors. Although Patrick West is British, he writes emphatically (and flatteringly) of his admiration of Irish sporting culture, following a tradition of Bill Bryson on England and Pete McCarthy on Ireland. Image courtesy of Fionnbar Callanan from his book, A Sporting Eye. 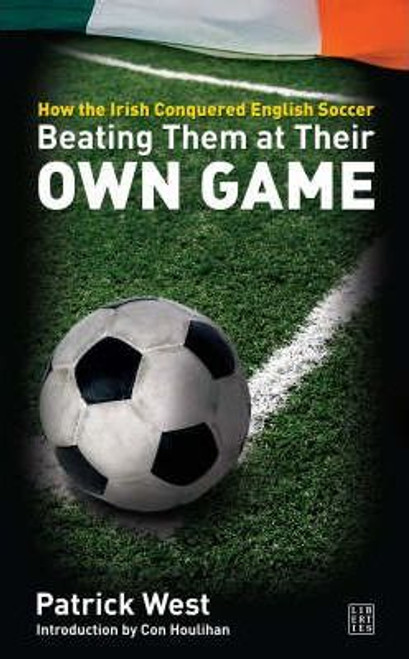 West, Patrick / Beating Them at Their Own Game : How the Irish Conquered English Soccer (Medium Paperback)