All the children in the neighbourhood were frightened of the long haired witch. They had heard the stories about the huge deep hole near the witch’s castle. When Tadhg disappeared everyone was certain that she had stolen another boy.

Children who have just started to read on their own will enjoy this exciting story.

Paperback, As Gaeilge san Iomlán- - leabhar léitheoireachta do pháistí as Rang a 4 agus Rang a 5 .

This delightful story book is a modern fairy tale in which a young boy called Éamonn decides to take revenge on an evil witch who lives in a castle at the top of a hill, for kidnapping his friend and chucking him into a deep hole in a barrel. Borrowing motifs from ‘Hansel and Gretel’, ‘Rapunzel’ and ‘Snow White’, the story describes how she lures children to her castle by tempting them with sumptuous feasts of sweets and cakes (wonderfully depicted in the illustrations) and then, in her vanity, gets them to comb her long curly hair. Unable to tolerate their protests and moaning, she shoves them into a barrel and rolls it down the hill. Thus the adventure begins… This is a very attractive book in every way. One could spend hours looking at the fine illustrations, which blend with the text into an integral whole. Following in the traditions of story-telling, the story begins with ‘Fadó, fadó in Éirinn…’ and the reader is immediately engaged. The contemporary setting allows the reader to identify closely with the chief protagonist in the text. The Irish in these pages, which is lively and naturalistic, is of a very high standard. The typeface is large and reader-friendly, and any vocabulary issues may be solved by consulting the glossary at the back of the book. Thus, this is a book which can be used for reading aloud to younger children, or which older children can undertake on their own, with its challenging yet accessible vocabulary. 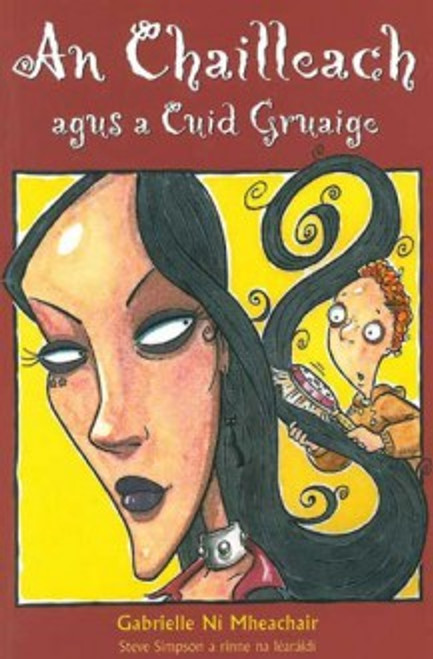