Author and historian Edward Bourke explains the genesis behind his new ( 2020) book - Murder by the Throat - an account ( largely based on eaxmining declassified accounts in the Bureau of Military History) of espionage, counterintelligence and collaboration during Ireland's war of Independence. The phrase that forms the title - 'Murder by the Throat' comes from a speech by UK Prime Minister David Lloyd George at the Guildhall, London on the 10th November 1920,  that he had "Murder by the throat" in Ireland, as he had reinforced the British administration Ireland with Black & Tans, Auxiliaries, and 20,000 extra troops. 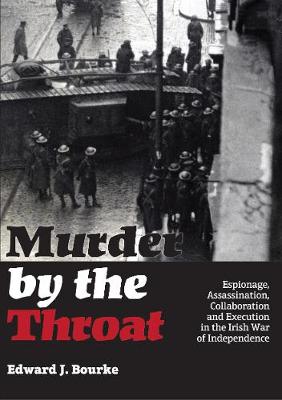 Edward Bourke - writes about the book

I became interested in the Irish War of Independence because of tales told by my grandmother about Bloody Sunday. Her husband and her two brothers along with her brother in law were at Croke Park and she became apprehensive when she saw ambulances arriving at the Mater hospital and knew Croke Park had been attacked. There was a raid by auxiliaries where she was staying in Drumcondra when her brother was detained for a week and a shop assistant detained for six months because his name was Treacy. She came from near the Ragg outside Thurles where some of the early more shocking shootings of the period occurred.

Some accounts of the bitter war of Independence read like film scripts where the Irish are action heroes but there were many traitors and collaborators as well. That aspect is glossed over and even names omitted from the stories. Worse still,  legends permeate the narrative such as "Michael Collins wiped out the British secret service on Bloody Sunday".  Only fourteen of some 80 agents in Ireland were shot on that day leaving a military intelligence and RIC crime special branch and the DMP G division to continue collecting information and running touts or spies.

Several descriptions of the events talk of the men killed being known as the "Cairo Gang".   I have discovered that the first mention of this name is in 1958,  and that it appears nowhere before that time. Though it has been widely adopted , neither the agents nor the IRA called them that name. Even the photo that usually accompanies that misinformation is labelled Special gang F Company auxiliaries ( who were police not secret service though there is some crossover)

The book covers the war in the shadows,  where mostly older anonymous characters collected counter espionage information and uncovered spies. They sifted intercepted post and were kept informed by telephonists, hotel porters and barmen. This permitted anticipation of round-ups and prevention of leakage of information. This picture has been described before. However there were many dreadful mistakes where stupidity prevailed, documents were seized and men arrested through carelessness. Ambushes were foiled. The British knew the names, ranks and addresses of IRA men because endless lists had fallen into their hands. The only mitigation was that they did not know the faces for all these names. In this they were hampered by the collapse of normal policing.

The book breaks activity by county areas to give an overall picture. Local histories are about the names and activities of participants and miss the similarity of events in disparate ends of the country. The control exerted from Dublin when the locals decided to communicate was a feature that is rarely appreciated. Groups in the west who were oblivious to danger were told to investigate locals supplying information to Dublin Castle. Executions of policemen proposed by IRA columns were forbidden by intelligence men because the person was quietly supporting the IRA.

The recent release of the Collins papers listing the alleged enemy agents at the time of the Truce shows the number and extent of British sympathisers identified among the population. The Mayo report proudly boasts under enemy agents "none" - little did the author of the report know that the IRA intelligence officer was working for the British and later policemen who might have known this were shot in case they talked.

The names of some 700 alleged agents are listed along with some 200 agents executed during the period.

I have paid a lot of attention to dates and details (but there will be mistakes) so as to allow further research in newspapers and to avoid confusion between the various statements given to the Bureau of Mlitary History. These accounts rarely give dates for events described. The book allows easy reference to the BMH witness statements by use of tabulated references which will allow the reader to check further local details online.

As with all matters of intelligence the full story will never emerge. The most successful spies are totally unknown because they were never uncovered. Documents in London would have been destroyed for secrecy and even after 110 years the file at UK Public Records on payments to informers in Ireland is still not available for research.

All out copies are signed by the author, and are available at the following link - https://thebookshop.ie/bourke-edward-j-murder-by-t...

Essential reading for anyone with an interest in the murkier aspects of Irish revolutionary history.