Go Ask Alice is a US published 1971 fiction book about a teenage girl who develops an addictive drug habit at age 15 and runs away from home on a journey of self-destructive escapism. Attributed to "Anonymous", the book is presented in diary form, and was originally presented as being the edited "real diary" of the unnamed teenage protagonist. Questions about the book's authenticity and true authorship began to arise in the late 1970s, and it is now generally viewed as a work of fiction written by Beatrice Sparks, a drug therapist and author who went on to write numerous other books purporting to be real diaries of troubled teenagers.

Intended for a Young Adult audience, Go Ask Alice became a hugely popular bestseller. It was initially praised for conveying a powerful message about the dangers of drug abuse, but more recently has been criticized as both anti-drug propaganda and also as a literary hoax ( in that it was originally presented as  a true story)  Nevertheless, its popularity has endured, and as of 2014 it had remained continuously in print since its publication over four decades earlier.

This is a Uk 1980 Corgi paperback edition, externally fair to good, , but age spotted moderatley inside, as well as tanning to the page block ends. Slim paperback, 143 pages. 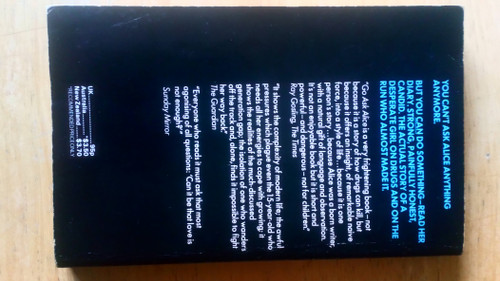